Last week on the official Second Life blog, Linden Lab announced there was a new set of starter avatars available for newcomer residents to choose from when first signing up. 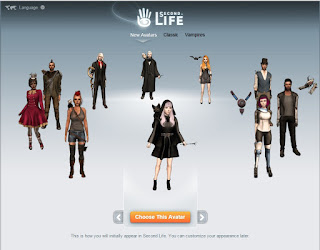 We're proud to introduce the all-new "Fantasy" starter avatars, covering a diverse range of "genre" styles including steampunk, vampires, sci-fi, post-apocalyptic… and beyond! There are 10 fresh starter avatars available right now, and you can use them as a basis for further customization — explore the Second Life Marketplace and personalize to your liking. These new avatars have normal "system" bodies with mesh wearables, which makes it easy to change their hair, clothes, accessories, and more!

The ten avatars are in five categories, one male and female each: magic, post-apocalyptic, sci-fi, steampunk, and vampire. Each of the avatars also comes with a pet, drones in the case of the sci-fi avatars, and mechanical pets with the steampunk. With it's owl pet, and distinctive black robe and crooked wand, the male magic avatar is clearly meant to appeal to "Harry Potter" fans. Inara Pey commented on her blog that the female post-apocalyptic "Petrol Sue" was worn by Grumpity Linden in Third-Party Viewer Development meetings. Linden Lab also included a video to help promote the new avatars. It's notable that the announcer says to the male magician, "Where did you study? No wait, don't tell me. Ha-ha! I'd be lawsuited ..."

Earlier in Second Life's history, there was a choice of ten avatars, five different ones with a choice of male or female, which included a "Furry" or a starter ringtail made by Luskwood and contributed to Linden Lab. But some time around 2008 or 2009, the Furry avatar was dropped and the selection became all human. In 2011, the choice of starting avatars was revamped to include thirty-six nonhuman avatars, twelve vehicle avatars, twelve robots, and twelve "animals." The "animal" series was created by Damien Fate, whom had earlier made a brand of Tiny avatars called "Loco Poco." In 2014, Linden Lab changed the starter avatars once again to a choice of twenty-four mesh avatars, twelve "People" human avatars and twelve "Vampire," the latter a collection of vampires, other monsters, and a monster hunter, and twelve "Classic" non-mesh avatars, all human. But there were complaints that the mesh avatars were static and unchangeable. So a year later, Linden Lab replaced them with more "efficient" versions.

Linden Lab's moving away (although not completely giving up) from nonhunan avatars, vampires aside, as starter ones has raised a few questions among some residents. But it could be argued with the sheer diversity of avatars available, tinies, micros, pixies, mers, taurs, ferals, furries, elves, ponies, and more, Linden Lab may simply have decided making a fair selection of nonhuman beginner avatars was just too difficult. Two opposing points of view made a year ago are just as relevant today. Hamlet Au saying, "These avatars feel less like Second Life, and more like, well, 'The Sims Online.' Which might be a good move, market-wise, but it does distinctly change new users' perception of what Second Life could (and frankly should) be." and Fuzzball Ortega, "I did think 'The Sims' when I saw the picture of the avatars, but nothing wrong with that. They start out with those avatars, then, once in world and after a bit of exploring, they create themselves. Buying different clothing, different skins, etc."