Skunk Party At The Happy Vixen, with Michi Lumin 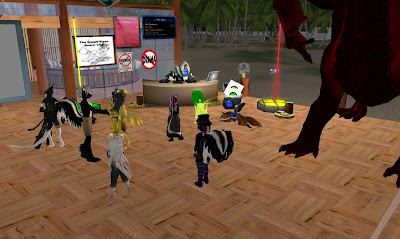 Thursday Sept. 22 was the day of the Happy Vixen's "Skunk Party." Although the theme was chosen in advance several days earlier, the news of the "Sabrina Online" comic coming to a conclusion made the part a tribute to the twenty year strip as well. In the past, there have been some impressive-sized skunk parties at Club Zero and Luskwood. The turnout for this one was somewhat light, but there were a couple notable personalities from Luskwood and Trotsdale. 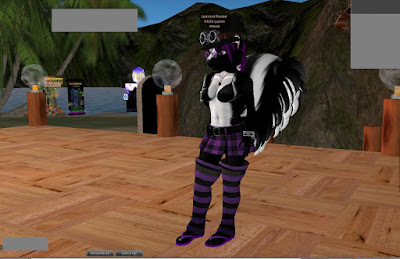 Among those there was Michi Lumin, perhaps the best known of the four founders of Luskwood, one of Second Life's oldest communities, as well as the location of the oldest furry avatar maker. Begining a few years ago, she's also been involved with keeping the sims of the pony community of Trotsdale going. She had dropped by to say hello. 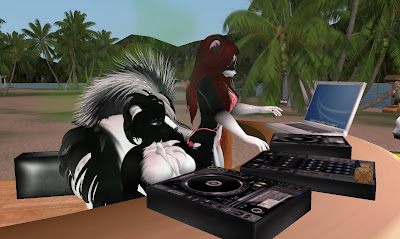 Also there was ScentualLust, whom in the past had been a part owner of Trotsdale. But had recently given up her share to Michi. She stuck around Skylark LeFavre, the manager of the Happy Vixen, and that night doing the DJing.

Scentual, or "Scents" as she's occasionally known, told me a little something about skunk spray animations. It used to be they could only just go straight ahead or at anyone giving permissions (unlikely). But more recent ones could target anyone nearby using "Restrained Life Viewer" features. A rather "stinky" situation indeed.