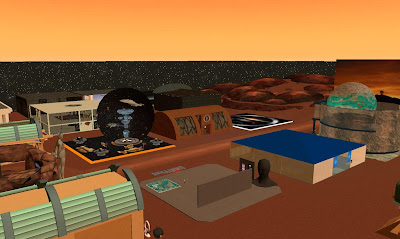 At 11 AM SL time today, Wednesday September 7,the Second Life Sci-Fi Faire opens. Organized by the Sci-Fi Alliance in Second Life, the event is to both celebrate the 50th anniversary of  the Star Trek franchise, and to raise funds for the American Cancer Society. The event covers three sims and over eighty booths. 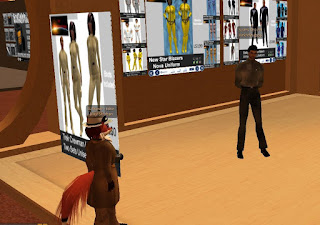 Kirk Wingtips, one of the head organizers, stated this was a spinoff event of the Sci-Fi convention, "its our in-between conventions event, the conventions themselves are the bigger event with six sims. We have quiet a few events coming up, the Milky Way Cabaret, some trivia, a Star Trek flight experience, some DJ's, and a little ship combat area." Of the booths, "some (are) using their booths to advertise and recruit new members, and some are vendors who sell some pretty cool sci fi-stuff, uniforms such as this one and ships, props and things." There were also taxi stations in which one could rez a small ship, get in, and it would take one around the place.

The landmarks for the three sims are the following: