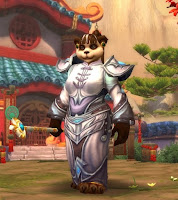 It's well known that fans of anthropomorphic characters, aka "Furries" have been a part of Second Life about since it started. But they're also a part of many games. "World of Warcraft," the old powerhouse of MMOs, had a few anthro races. "Skyrim" has two. And more. Mods of popular games allow you more options at playing a nonhuman character. Nydia Tungsten recently had a few things to say about the issue.

Read Nydia's story in Other Grids, MMOs, and Games.