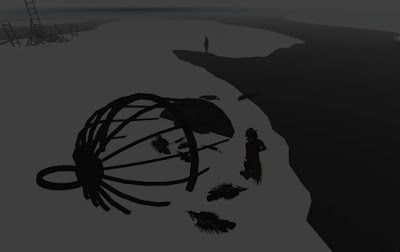 Some sad news. According to New World Notes, the Chouchou sim will reportedly be closing soon. Made by two Japanese musicians who named it after their band, they stated the sim would close this Friday or any day afterwards. The two musicians, vocalist Juliet Heberle and composer Arabesque Choche, had met in Second Life, and performed there in numerous events without having met each other in real life. But eventually the couple did meet for real, married, and have a child. While they have been expanding their audience over the Internet, they cut back on their performances in the virtual world. 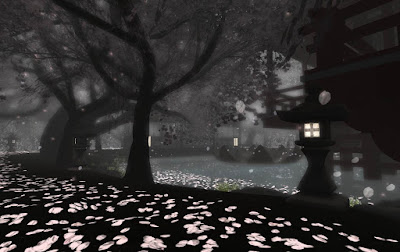 The scenery of Chouchou, and it's sister sim Chouchou V, was artistically beautiful. When I arrived, all was night and everyone around were black silhouettes. The soft ambient music added to the atmosphere. Visiting later, night had turned to day, first a cloudy white sky, then a clearer blue one. Besides the ground area with a few features such as a piano in the water, a half-sunken birdcage, and ladder leading up to nowhere, clicking on the last one led to two places in the sky. These were Islamey, a Japanese temple with cherry blossom trees, and Mememto, a large cathedral. There was a cinematic hud one could touch and receive, which made the screen look like a movie theater projection. 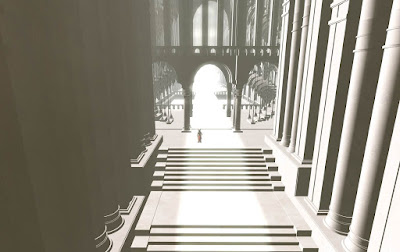 It was Kira Balestra, a fan of the sim, whom had told Hamlet Au that the sim was set to close. She appealed in the Second Life forums for the sim to be saved, which received numerous fan pictures.

By all means, visit the place before it's gone.