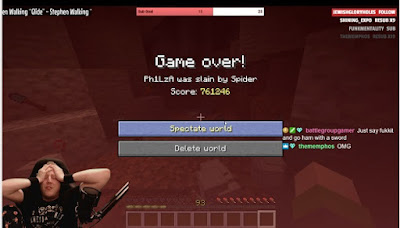 When it comes to Minecraft, most people known by yours truly either play it in servers with friends or in single-player mode. In the latter, I've never known anyone to play a serious game in hardcore or "permadeath" mode. There's a lot of things in Minecraft that can do you in from skeletons to zombies and those infamous creepers. And once something gets you, everything you've accomplished is gone and there's no one else that can see or touch what you've made. So it's no surprise that the second longest lasting time in hardcore is supposedly a "couple weeks."

What such a player can do to make a lasting record is take pictures or videos. And apparently that's what a Minecraft player known as Philza did. His run at Minecraft hardcore went beyond two weeks thanks to some skill and a little luck, getting past a few near-misses that would have meant the end had something gone slightly different. But about a week ago, he met his end when he was tag-teamed by enemy mobs, including a powerful one, when not having quite the right equipment on. "Oh NO! Really?! That's how I die?!" And so his marathon Minecraft permadeath game ended at five years. "Stupid! I'm f***ing stupid! ... a baby zombie ... of all the things ..."

One can view the video Philza made on his Twitch account, with the end coming just after 1:12:36 (warning, some profanity). Near the end, he comments, ""stupid lucky ... been getting lucky too much, ran out of luck. Thanks everyone who's stuck with me for so long,it's been a *** trip, it really has."

Philza's score was 761246, though what people will be paying attention to is just how long he lasted. It's a safe bet this is one Minecraft record that may never be broken.