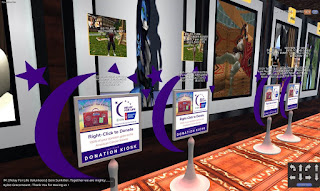 Earlier this month, Relay for Life's Team Sunbeamers started two more of it's "Bid Me" events. WolfSinger SilverShadow (WolfSinger Fluffball) volunteered for "Bid Me Bunny." Team Captain Rita Mariner put her appearance on the line as well with "Bid Me To The Dogs."

The four kiosks were at Club Cutlass for people to donate to, having until Friday May 17 at 8PM to do so. Shortly after time was up, the results were made public in a group announcement. 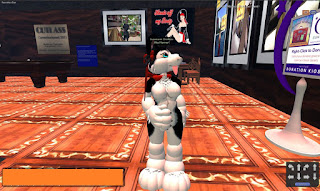 So far, Rita's been taking her new look in stride, cracking a few dog jokes here and there. But Rita having a reputation as a tough bunny, so far no one's talking about putting her on a leash. As for "Bunnysinger," so far no comment from the DJ whom will now have to deal with "hare-raising" puns.

With these "Bid Me" events done, and the Relaystock over, the team is looking towards the Relay Weekend, a few weeks away. There may or may not be one more event. But at Platinum level fundraising, it can only be considered a successful season for "The Little Team That Could."