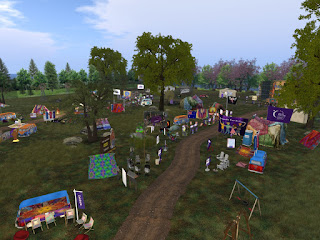 The 6th Annual RelayStock multi-team Relay For Life event concluded Wednesday with a solo performance by  the Tiny Maniac Band and the 3rd annual Bid The Lindens Bald fundraiser. The annual event hosted by the Relay Rockers, and sponsored by X-City Games, gathers RFL of SL teams for a weekend of ‘Peace, Love, Music and Hope”. Teams are provided prepared VW van and tent sites set on a 1960’s style outdoor music festival venue. RelayStock is organized by Rockers’ co-captain Arizona Ballinger and this year hosted more than 30 teams, who came together to celebrate the RFL season. Teams were also provided the opportunity to host 90 minute segments on the RelayStock stage and raise funds in their own kiosks.

The weekend, which kicked off on Friday May 17, hosted live performances by Wild Eagle Tribute Band with MrMiKie String, Austin Moores, Todd Rumsford and Keeba Tammas and the Tiny Maniacs and more that a dozen DJs.  On Sunday afternoon the Relay Rockers concluded their 2019 Celebrate, Remember, Fight Back Top DJ Competition crowning Tril MacLeod as the 2019 CRFB Top DJ. 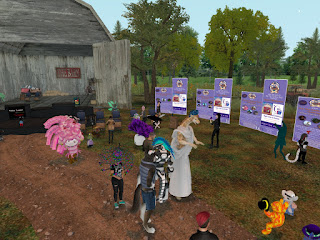 The 3rd Annual Bid The Lindens Bald fundraiser at RelayStock.  Five teams of Linden Lab from different departments put their virtual hair on the auction block with the team raising the least going bald in Second Life for 30 days. Teams were made up of nearly 30 members from Concierge Support, Tier 1 Support, Customer Account Operations, Land Operations, and Support Management. On Wednesday afternoon SL residents, along with dozens of Lindens with their distinctive blue tags and text, got to watch Governor Linden shave the hair of the members of the Tier 1 Support team. They will be bald in Second Life for the next 30 days.  Overall the event helped raise L$429,000 ($1716) to support the American Cancer Society.

The fundraising was shared by 3 RFL teams, the Cure Chasers, Roos With A Dream and The River of Life.  Earlier in the week, the Relay Rockers reached their season goal of raising $15,000 and decided to retire their own kiosks in favor of helping these three teams.  Rockers Captain and former RFL of SL Chair “We couldn’t have done it without these three terrific teams supporting us.” Nuala Maracas explained. “The CRFB Top DJ competition drew competitors from across SecondLife, including DJs affiliated with the River ( DJ Landy ) and the Roos (DJ Kayla Flow). These 2 competitors raised nearly L$800,000 ($3200) towards the Rockers fundraising goals. The Roos and Sienna Thor of the Cure Chasers were a constant presence throughout the competition, during RelayStock and at many RFL team events all across SL. The River hosted several CRFB events at their own venue and while the Rockers will continue to fundraise until the end of the season, we decided to recognize these 3 teams by retiring our kiosks and dedicating our remaining fundraisers, such as the Twisted Hunt, to these 3 passionate and supportive teams.” 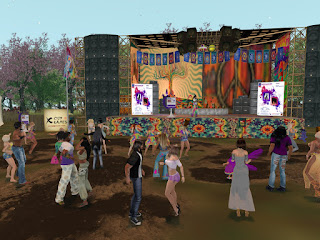 The finals were held on May 19th on the RelayStock stage. Both presenters turned out large numbers of supporters forcing organizers to raise the region limit in order to accomodate the crowd. Following a short rainstorm which provided lots of mud for attendees to dance in at the front of the stage, Landy began his 90 minutes. His kiosk quickly rose, ultimately topping out at L$186,000, bringing his 3 show total to L$504,773  ($2019). Tril followed and it was obvious she came prepared to win top honors. Donations to her kiosk passed the L$300,000 level quickly and after just 40 minutes stood at more than L$500,000. Her final total was an amazing L$575,100 bringing her 3 show totals to L$1,183,184 ($4732). Overall the 2019 CRFB Top Dj Competition provided L$2,518,618 ($10,075) to help the American Cancer Society Save Lives, Celebrate Lives and Lead the Fight for a World Without Cancer.

The weekend concluded with Relay Rocker co-founder and T1Radio DJ Trader Whiplash playing music from Woodstock as Relayers danced in the mud and celebrated late into the evening.

The Rockers wish to thank Linden Lab, X-City Games, all of our CRFB Competitors and their supporters, They also want to thank the 100’s of Relayers and Second Life residents who turn out each year for 3 Days of Peace, Love, Music & Hope at RelayStock.