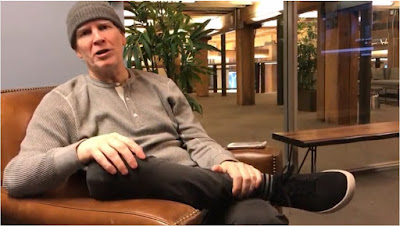 The first thing Altberg talked about was his optimism about Second Life, saying it was "doing quite well, there's a lot of positive signs." It was making more money, and the number of Premium accounts was up, "We're very bullish about the long term health of Second Life. ... A very hardcore entrenched audience in there."

The CEO talked a little about how things were when hie first arrived five years ago, "when I came here, the users were a little bit angry, there was a disconnect between the Lab and the user base, the residents." He went on to say some of the Lab's policies at the time "didn't make much sense." Five years later, "We're psyched with what the Second Life team has accomplished," saying there were some good people among Linden Lab's employees.

Talking about the Lab's focus on continued revenue growth, saying too much had been charged for land, and they were taking steps for those with mainland property to get more for their money on it, as well as less costly private sims. But they had to make up for the lost revenue there somewhere. He added they were still working on their pricing strategy, hoping to take another step in a few months.

"There's no virtual world ever made that has the diversity of Second Life," Altberg would say, though saying this "incredible" diversity was a challenge to run, calling a bit like dealing with the different policies of cities and countries to "find the right balance." He also compared a resident looking for their place in the virtual world to someone moving to a new home in another city in real life, it's a lot of effort for someone to find the right community, find the right neighbors, find the right clubs, activities, and places ... it takes a lot of effort to be comfortable and happy with a place within your social circles."

The CEO also stated those who thought Second Life's residents were heavily into adult activities because so much of the sims were marked "Adult" were mistaken, "what's marked as an adult region is a completely meaningless metric. A lot of people mark their regions as adult because they (fear they) won't have freedom of speech, but they're not really doing ... what you consider adult activities there." It wasn't necessarily a warning that people would see things "that you will be shocked for the rest of your life." Of those who do engage in adult activities, he didn't see them as necessarily bad, "our job is to make sure things are done legal and healthy for the community." He did admit sometimes people do cross a line, "so obviously the banhammer has to come out sometimes. ... overall, it's not really a significant problem."

He also talked about the "massive effort" to move Second Life's data from servers in Phoenix to Cloud servers by Amazon, feeling it would probably take less than a year longer. As Sansar started with Cloud servers, that gave them some knowledge that helped with their move of the older virtual world's data there. He stated once the move was completed, people in faraway places such as Australia and Asia would better able to enjoy Second Life.

Hamlet asked the CEO about the three top mesh bodies being "horribly optimized" and causing a great deal of lag. The CEO answered what happens to the avatars was ultimately up to the residents, saying that was why they introduced the option to jellydoll high complexity avatars, hoping it would create a supply and demand issue that would pressure avatar makers to come up with less laggy avatars, "we can plead and beg, but ultimately users going to do what users going to do." He did say there ways always the option of giving sim owners the power to limit how complex an avatar on their land.

Altberg called getting Second Life's overall user retention rate going up and continuing to go up "the toughest goal we have." Mentioning that Second Life has a number of games, he mentioned the possibility of introducing a quest.

Of the upcoming iOS viewer for handheld devices, the CEO stated this would not be a true independent viewer, but a "companion." He had no idea at the moment when they might be available.

The talk soon turned to Sansar. Altberg stated the reasons for it's low numbers was that it was still a product very much still in Beta. He went on to say they could have continued to develop it in secret, but wanted to get feedback from those that were using it, "some great users whom have been persistently with (the Sansar team) through this journey." Hamlet asked the CEO why VRChat was so popular in comparison. Altberg answered it was because of the creativity of the avatar makers, which allowed for plenty of roleplay. But in Sansar, a content creator could make money. They can't do that in VRChat. So he was confident eventually Sansar would do better than it's rival. When asked about Second Life residents who questioned why the Lab was investing so much in Sansar, Altberg responded that Second Life had both a larger team and a larger operation budget than Sansar.

Two beautiful products, I love them both for different reasons. ...I hope they're both successful for a long, long time."