RFL Sunbeamers: "Bid Me Bunny" and "Bid Me To The Dogs"

It's been just a few days since the Relay for Life's Team Sunbeamers reached Platinum level fundraising. But rather than rest on it's laurels, the team is already getting into two more fundraisers: "Bid Me Bunny" and "Bid Me To The Dogs."

For "Bid Me Bunny," the volunteer is WolfSinger SilverShadow (WolfSinger Fluffball), also known at the Happy Vixen Beach Club as DJ Aroooo, whom is usually in an anthro wolf avatar. "Wolfsinger is now up on a BID ME to go Bunny!" team captain Rita Mariner announced in group chat, "And I already nailed him for his first week. For each 3000L donation raised and deposited on his kiosk, he will stay a bunny for an additional week.  All monies going to the Relay for Life and American Cancer Society."

As usual for Sunbeamer "Bid Me" events, there are two kiosks. For those who wish to "bunify" him for a while, donate Lindens to the kiosk on the right. For those who would rather Wolfsinger stay a wolf, there's a default kiosk on the left to keep him as is. Despite already having to face being called "Bunnysinger" for at least a week, so far he's keeping his cool about the fundraiser, "Well as long as I don't have to wear a tutu as well."

Despite already having been a pink bunny last month, Rita is once again putting her looks on the line. This time, it's "Bid Me To The Dogs." Like Wolfsinger, for every 3000 Lindens placed in the right kiosk, Rita will be sporting a collar, and be subject to fire hydrant jokes. Those whom would rather have her stay a bunny, donate to the kiosk on the left. 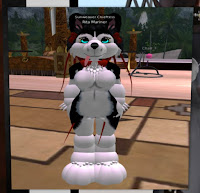