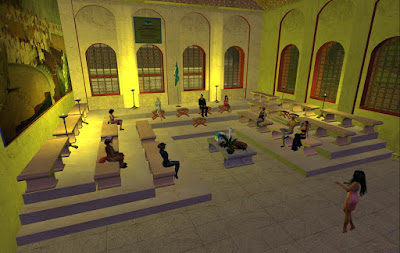 On Wednesday May 29, the winners of the elections earlier this month in the Confederation of Democratic Simulators were sworn in. The ceremony took place at the Praetorium of Colonia Nova at 1PM.

"The affirmation of office is a public declaration that in the office to which you have been duly elected," told the members of the 31st Representative Assembly, "you will solemnly affirm to uphold the Constitution of the CDS and take the duties of the RA seriously. So please if you would, insert your own name into the RA affirmation and read the text into the local chat:

Each of the RA members gave their oath, including MadmaxSoulLover Resident. the freshman."Thank you everyone," he told the people, "I am truly honored." "Yay! I'm no longer the newest newbie!" commented Lyubov, " Boy we have work for you Max!" Han Held, a former Chancellor, commented, "I'm excited to see our government filled with 'new blood'; this is awesome!"

Chancellor Kyoko Furse-Barzane (Samara Barzane)'s reelection was a formality as she was unopposed, but reaffirmed her oath to office at the ceremony.

The Inaugural Ball will be on the weekend after next, on Saturday June 8.