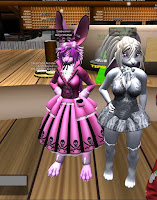 On Monday, Team Sunbeamers of the Relay for Life in Second Life finally reached Platinum Level fundraising, 250,000 Linden dollars or about $1000 USD. And so came what's become a tradition among the Sunbeamers and their friends: The Platinum Avatar Challenge.

For yours truly, for the third time I would be something I haven't been before. This time it was a pink avatar. *But*, I didn't say what kind it would be. So in a slight twist of the challenge two years ago, I appeared as a pink "Rita clone." I revealed the new look at 4PM At the Happy Vixen yesterday. It got a few chuckles, thought not as many the first time I pulled it off. Rita herself, whom doesn't think much of being a pink bunny didn't have much of a comment this time. My own "bubblegum crisis" will be for a week, baring those occasions when I'm obviously doing something for the Newser, such as interviews and covering the Fantasy Faire.

This time, I was joined by others in the challenge. Nydia Tungsten had offered to go purple for a week. And so yesterday the normally white vixen was sporting a shade of amethyst  But it was DJ Geerkil and his Dragon Crew teammates LS Raccoon and JB Raccoon that made the biggest change: going as Yinglet avatars. Geers had read up on the lore of the usually amusing small beings from the "Out of Placers" online comic, and found the creatures interesting. For someone used to huge avatars though, shrinking to being just a few feet high took some getting used to. On the other hand, fitting behind the DJ booth and dancing with others on the dance floor was now no trouble. The three stated they'll be staying in these appearances for three months. Definitely "above and beyond the call of duty." We'll keep them well-stocked with clams and oysters.

But the Relay goes on. The Sunbeamers are planning another "Bid Me" event this week, and there will be other chances this month to raise some funds, such as the Relaystock. With Platinum having been achieved, next the Sunbeamers are after Jade level fundraising, which is 500,000, a half million, Linden dollars. A daunting task, but we've done it before. And yes, I'll wear the "Bix Bilby" avatar again.