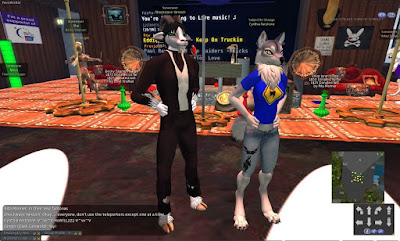 When the results of Team Sunbeamers' last three "Bid Me" fundraiser events were calculated last Friday, two of the volunteers, Shockwave Yareach and Cynthia Farshore, were out of town. Both are back, and when they showed up at Club Cutlass last night, they were sporting their new looks. For the next few weeks, they will be each other's respective avatar type, Shockwave a goat and Cynthia a wolfess.  "Nobody use the teleporters, except one at a time," Shockwave mused. Cynthia had the title "Subject to Change" over her name, commenting this felt like a bigger change from when she was a fox last year. 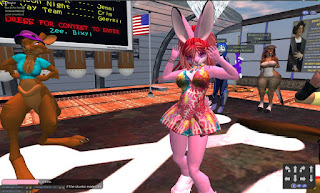 The "Bid Me" time periods for Shockwave and Cynthia, as well as Liska Fuchs and yours truly, end on April 19. Rita Mariner, whom is stuck as a pink bunny only until April 5, may do another "Bid Me" soon. As of now, the Relay team has raised over 89,000 Linden dollars.

Bicyl Shuftan
Posted by Bixyl Shuftan at 6:02 AM