Fantasy Faire: Linden Jail And Bail, Delay of The Quest 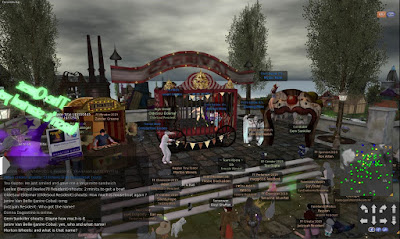 Wednesday April 24 was a notable point at the Fantasy Faire with a certain event: the Linden Jail and Bail. Two Lindens, Patch and Madori, and one mole, Ancient, were locked in a circus cage. A few others were nearby either for moral support, to make sure their peers weren't tarred and feathered for recent glitches, or both.

Getting there well after it started, it seemed the three were in some danger of being accosted by tinies, "I poke your tummy!" "Let's all poke his tummy!" "TUMMY BEEP!!!!" Someone defended their actions, "Because he's secretly the PIllsbury Doughboy!" One however did give them something to drink, "It's prison wootberry."

Patch responded by stripping down to his undies, perhaps to distract the crowd. Some found this shocking, "This just jumped from PG to something else." But some just called for more, "Get your blackmail pictures of Patch in SPEEDOES!" "I am putting that in my profile!"

Ancient didn't think too much of the cage, "Smells like sweaty rat in here." At one point, he was chewing on the bars. Mystic Mole cautioned him, "Ancient, that isn't a snack!" Someone shouted, "They made of licorice, Ancient!" Ancient spat, "I hate licorice, you monsters!"

Patch would give out a few of the coveted Linden Home houseboats plus sis months Premium for free for 50,000 donations, "One more houseboat for 6 months, L$50,0000!!!!!" His last giveaway, "A custom named account for L$60,0000. ... It will have to be a new account, created specially for you!!!" It was quickly snapped up by Gwen Enchanted.

Gem Sunkiller would tell me a total of 434,000 Linden dollars were raised at the event. 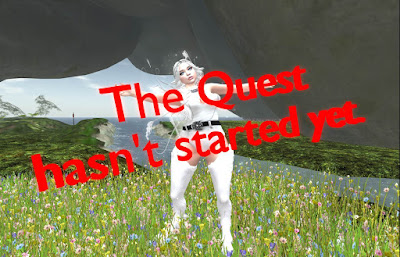 It's no big secret that in the past several weeks, the Grid's been a little buggier than usual, and tping to the Fairegrounds, or even just sim crossing can be problematic. But the most noticable glitch at this year's Fantasy faire is the delay of the Fairelands Quest which was supposed to start on Monday. Instead, it's been delayed day after day, and finally yesterday on Wednesday people were told the goal was to get it working by Friday April 26.

The fiercest gremlins on the grid. The finest gremlin-smackers in the metaverse. It's a battle to the death -- all to rescue the Quest and restore it to our Faire family!
There's still work to be done, but our heroes with their vorpal swords pledge to win the day. We're aiming at seeing the Quest make a joyful return on Friday.
Never fear, with the extra days we'll have for the Faire this year, you'll have plenty of time to finish, and enjoy the best dragon's hoard of prizes anywhere!

Hopefully the Fairelanders can get the quest going before they have a peasant rebellion on their hands.