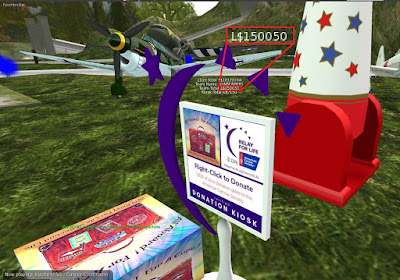 Saturday April 13 was the Sunbeamer Air Show at Farshore Field in Sunlight Bay. This was the sixth air show hosted by Cynthia Farshore held by the Relay for Life's Team Sunbeamers. Despite some technical glitches related to the "teleport disconnects" issue that caused some planes in flight to crash, the crowd enjoyed the event  The event also netted almost 50,000 Linden dollars for the team, increasing it's total almost fifty percent to a little past 150,000 Linden dollars.

And another successful air show, thanks to Cynthia Farshore. People were doing the blimp race, and taking Snowy's balloon tours.  Not only did the team reach Gold level fundraising, it kept going to 150,000. We're well on our way to Platinum level.

What the Sunbeamers want for the long term is for the team to achieve last year's record-setting fundraising level once more: Emerald rank. One complication though is the amount of money it will take has been raised some. Achieving Emerald level will take a whopping one million Linden dollars. For now, the next goal of the team is Platinum level, or 250,000 Lindens. As an incentive, yours truly is offering "The Platinum Avatar Challenge," taking on an unusual look for a week. The first couple times I did so, I took on looks I had never been in public before. What will it be this time, I have yet to decide, though have heard suggestions such as being the Rita clone again, or a Crux hybrid.

Our next event will be this Saturday April 20 at the Happy Vixen Club in Purrfection Estates. The beach club will be host to a six hour event with three DJs, with all tips going to the Relay kiosk.