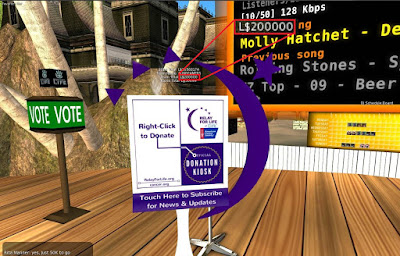 Since the joint Sunbeamer/Meli's Maniacs RFL team event at the Happy Vixen last Saturday, donations have been continuing to come in. On Thursday April 25, the team finally reached the 200,000 Linden dollar mark.

We're getting higher and higher. Just 50K more until Platinum.

I've also made a little promise to the team, this year's "Platinum Avatar Challenge." Once again I'll be something that I haven't been before, at least at neighborhood club and smaller Relay events: pink. Everywhere else, back to normal as I still need to see what's going on for the paper. It'll be for one week.

Trader Whiplash of the Relay Rockers has made an offering of his own. If the Subeamers hit one million Linden dollars, the amount needed to get to Emerald level fundraising, he'll stay in a dinky avatar for a week. So hopefully the 'beamers can make him live up to his promise.