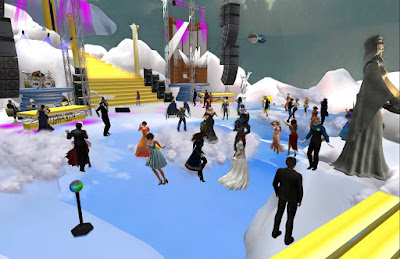 Two big events in Second Life came to a close this weekend. On Saurday night, the Virtual Worlds Best Practices in Education had it's conclusion with the closing ceremony followed by a Dick Clark Tribute Concert, featuring performers representing various singers of the past from Freddie Mercury to Louis Armstrong to Aretha Franklin to (preteen) Michael Jackson. On Sunday, the Relay for Life's Home and Garden Expo had it's last shows, including a special appearance by Patch Linden at the Relay Rap.

The sims for the VWBPE will remain up for a few more weeks, allowing people to see the exhibits (and try out the underwater hunt). But it won't be long before those for the Home and Garden are closed. Later this month is the next mega-event for the Relay, the Fantasy Faire, which will be in temporary sims in the area.

We'll soon have a little more about the VWBPE.

Addition: For those who want to check on VWBPE discussions they missed, check the list of videos here: https://www.youtube.com/user/VWBPE/videos .
Posted by Bixyl Shuftan at 6:02 AM