April Fools In And Out of Second Life At A Glance


The April Fools joke article that we at the Newser pulled last Monday got a bit of chatter. Some loved it, "Hilarious!" Many just gave a chuckle or "laughing out loud." And some didn't like it, "Bix. Yur courting getting murdered here." Thank you all for the comments. For those who loved it, we'll try to be just as funny next year. For those who didn't like it, well, feel free to offer suggestions. 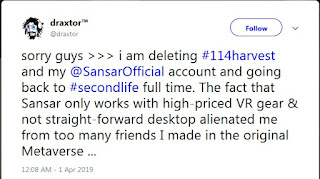 But this wasn't the only April Fools joke around, even in Second Life. Nydia Tungsten made an announcement that she would soon be doing a special calendar, but instead of her usual 12 pictures of anthro females it would be of the new Yinglet avatars. There were a few chuckles, and there were a few asking what a Yinglet was, but everyone quickly realized it was a joke. Marianne McCann of Bay City told me she'd made a joke announcement of leaving Second Life in a group IM chat. Draxtor Despress posted on his Twitter that he was leaving Sansar, followed later by "April Fool."


In the past, Linden Lab had done a couple jokes such as the "Rick Roll" and their parody of the "Mayhem" insurance commercials. But not this year. 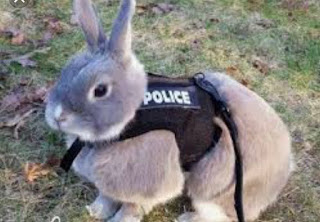 In real life, there were some April Fool joke announcements. Probably the one that got the most chuckles was the one from McDonalds about a burger that was all pickles. One Australian city announced they were getting a drug-sniffing bunny on it's force. Australia's Twitter page made a joke image about a koala being born with leopard spots.

In the world of online comics, two I follow had a couple April Fool strips. In "Freefall," cartoonist Mark Stanley included a number of cameos with characters of several other strips. Those going to "General Protection Fault" found a parody of a default page that basically stated "if you can read this, the webmaster needs to get a clue." "The Belfry," which is a list of online comics, had it's page upside down. 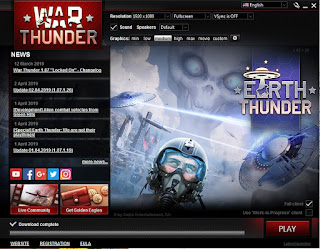 With online games, World of Tanks and World of Warships didn't have the joke games they had in the past. But they did have a couple chuckles. World of Tanks had a joke video about the first tank on the Russian field, the MS-1, with the narrator praising it in ways that a used car salesman would be making notes of. For World of Warships, their April Fool was "Skipper," a matchmaking system to assist in making more compatable teams that was a parody of current dating software, "the socially-alienating swipe-based system behind today's hottest dating apps will be your ticket to the perfect team!" As in previous years, "War Thunder" had another April Fools game: "Earth Thunder." In this special game, players fought air battles in flying saucers shooting energy beams at one another over an abandoned city taken over by the aliens (video). Probably the joke game of War Thunder remembered the most was one of their first, the "My Little Pony" fighters in 2013. Years later, I still hear pony fans say they wish the company would bring it back.

So there's April Fool's 2019 at a glance. Hopefully you the readers had a lot of fun, and we'll be back next year with some