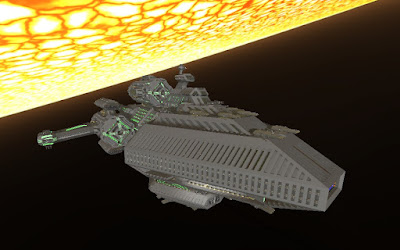 Besides busy modding her outfits, Valkyrie Ice has been busy in the MMO "Space Engineers." Here is a work of hers that took over a year to make: "The Walkyure, an exercise in large scale ship building." But as the game is in early release in beta, it has been subject to change. Among the changes were some that made the ship impossible to finish as planned, at least for now.

Well, at least you can see what I spent over a year building, only to have SE's "PVP balancing" make impossible to finish.

The Ship made to use the Leviathan Engine wings, The Walkyure was supposed to be a massive carrier ship, able to support multiple fighters, manufacture more at will, defend itself against entire fleets of pirates, etc.

Instead, she's an unfinshed hulk that is likely to never be finished until Keen decides to make the game friendly to BUILDERS again, instead of PVP combat junkies.

Oh well. If you have any interest in ART instead of blowing each other up, feel free to load her. It's a world, and will load all mods. It's primarily Shao mods, with a few others for specific items. You can fly through most of her since the game has turned the majority of her into a ghost, and made it impossible to add any more blocks.
Posted by Bixyl Shuftan at 6:01 AM