Patch and Grumpity Linden at The VWBPE


Last week on April 4, Patch and Grumpity Linden spoke at the VWBPE. Then answered some questions from the event host, Phelan Corrimal, as well as a few from the audience. Grumpity was in her stick-figure avatar. Patch had on mouse ears and a tail. 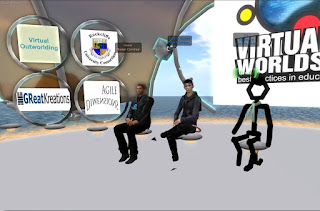 Of summarizing what Linden Lab has accomplished  in the past twelve months, Grumpity commented there has "so much going on, it's hard to think back a full year." She touted general improvement in Second Life's infstructure, a fair amount of content and feature development, the introduction of animesh, the new Linden homes, new estate tools (still ongoing), parcel and estate management, and helping educators with their courses. Patch brought up Linden Lab's involvement in SL15B, "lots of gift stuff happening," and things coming up beyond Linden homes.

Of moving Second Life from current data centers to cloud-based servers, Grumpity stated the Lab was "very carefully moving things and not disturbing the way things are set up. ... with a 15 year old infrastructure, there's some complexity there." She hoped it would eventually lead to lower prices for residents, but "the migration from the data center to the cloud is quite expensive for us, taking a lot of resources and additional costs." So if there is an effect on what residents are charged, it will be "a few years into the future"

Work on a mobile client for Second Life was going on, Grumpity saying, "I'm looking forward to seeing how that impacts Second Life usage in education. ... There's not a lot to report yet. ... SL wasn't designed to go on a mobile." She stated the Lab was going in the direction of an IOS style viewer for now, "a robust text-based viewer."

Of the new Linden Homes, Patch stated didn't want to reveal too much. He called them a "complete redesign,' from the original ones. The "structure of the regions themselves designed more organically, less repetition, more choices," and more options to modify the homes. People will also be able to modify them from inside the homes themselves instead of "web-based tools" as they are now. Already, the land for the new homes was being placed, "The continent will grow as we continue to roll these things out ... it will get much bigger. We will .. expand continent connections, water pathways" for sailboats and flying.

When asked if they were improving existing tools for users, Patch stated they haven't gotten new ideas or requests from the residents, going on to say his team doesn't make the tools regular users of Second Life put to use, but use them as well. Grumpity called it "eating our our dog food," commenting one can only put so much on a prim.

Of Sansar, Grumpity stated she and Patch have been "rooting for the success of Sansar" but they've been mostly looking from the sidelines with their attention on Second Life.

After a while, questions came from the audience.  One was if the Lab was trying to improve Second Life's Search function. Grumpity answered that there was a project ongoing about that, adding a few years ago there was another for Marketplace search, calling it "painful and complex."

It was asked if having an app to get on Second Life via mobiles would affect age restrictions. Grumpity stated the introductions of mobile clients would have "zero effect on that."  They were also asked if there were any plans for a new grid that didn't allow for adult content so educators could more easily use it to teach younger students. Patch stated that would require a policy change by the Lab, "the idea of a second grid isn't foreign, but it's not on the roadmap." He would go on to say Sansar pretty much handles that function and there's been much improvement there lately. 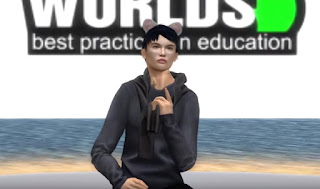 When asked about plans for artist development, Patch responded that the Linden Endowment for the Arts was in "hiatus." But people have come forward to the Lab to offer ideas to move things forward, so he told the audience to watch for developments.

One question was how can Linden Lab overcome the impression that Second Life is a "seedy world." Patch Linden didn't think that was the case, and if so not as much today as yesterday. Grumpity went on to say the Lab welcomed Second Life's different communities with their different interests.

The last question to the Lindens was how would they like to see more interaction with the education community in Second Life? Grumpity wanted a more open forum for conversation, "We can highlight your work, and you can influence ours." Before leaving, the Lindens asked the audience to spread word about the educational resources of Second Life.

To view the video from the VWBPE, click here: https://youtu.be/BH_Zogm8zAQ .