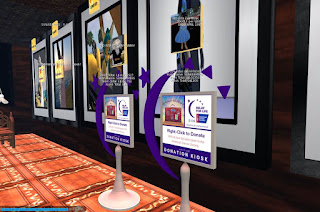 Over the weekend, the Relay for Life's  Team Sunbeamers reached a milestone. The total amount ot Lindens raised for this year passed the 100,000 Linden dollar mark.

Team captain Rita Mariner, having just finished her "bubblegum crisis" following her "Bid Me What?" in which she had to be pink for a week, has volunteered for another Bid Me, though a less drastic one: "Bid Me Chipmunk."

I have also started another BID ME.  I will go CHIPMUNK for a week for each 3000L reached.

As with other "Bid Me" events by Team Sunbeamers, there are two kiosks. One is for those who want the volunteer to stay as is, and another for the change. To donate, head to Club Cutlass at Sunweaver Bay (114/117/757).

Besides the "Bid Me," there are two upcoming events for Team Sunbeamers. One is the Farshore Field Air Show this upcoming Saturday April 13. Another is a party at the Happy Vixen Beach club on Saturday April 20.

With less than 25,000 Lindens left until the Gold fundraising level, already people are talking about Platinum. That rank is achieved at 250,000 Linden dollars raised. Last year, the team pulled out all the stops and made it to the never before achieved Emerald level. Getting there this year would take one million Linden dollars.