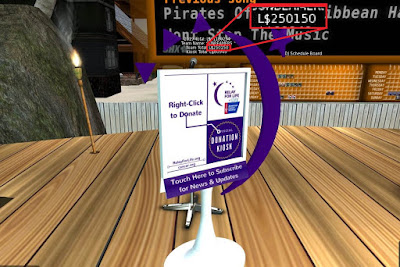 Once again, "The Little Team That Could" has done it. For the fourth year in a row, the team has gone beyond Gold level fundraising to Platinum. After reaching 200,000 Linden dollars a few days ago, there were some sizable donations, including team captain Rita Mariner. And so on late afternoon April 29, the amount raised for this year reached 250,000 Linden dollars.

There were a few little incentives for people to donate. Nydia Tungsten volunteered to be purple for a short time. DJ Geerkil Ziskey and two others on the "Epic Failure" team will be switching to Yinglet avatars for a while. And then there's the matter of a certain fox who offered to switch to a pink avatar, at least for club and smaller Relay events, for a week (everywhere else such as the Fantasy Faire, I can go back to red fox). Like the first two times this "Platinum Avatar Challenge" was done, it's something I've never done before. The big reveal is today at the Happy Vixen club at 4PM.