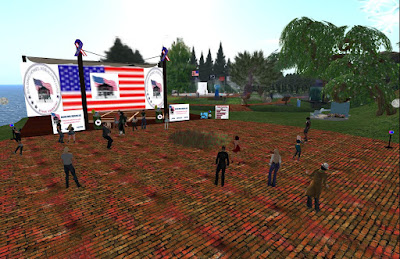 On Sunday March 31, Veterans Isle held it's monthly fundraising concert. Several live musicians and one DJ performed for the crowd for the event that went from 11AM to 4PM SL time (2 - 7PM EST). The money raised goes to the Homes For Our Troops charity, which helps wounded veterans keep a roof over their head. The events are organized by guitarist Frets Nirvana

As the musicians played on, people donated money to two house-shaped kiosks on either side of the stage. I dropped by as Melenda got off the stage, and the singer Wolfie (WolfStarFire Resident) got on. The lady whipped up the crowd, living up to her name as she howled into the microphone, and getting some in the audience to howl themselves. She reminded everyone that Frets had pledged to donate some of his own money for every so much raised, and challenged her listeners to have him leave with a much lighter wallet. About forty minutes into her set, the event had raised a total of 100,000 Linden dollars.

While Veterans Isle usually holds it's concerts on the last weekend of every month, next month has Memorial Day weekend. So it may be the weekend before.

More more about Homes For Our Troops, click here: https://www.hfotusa.org .