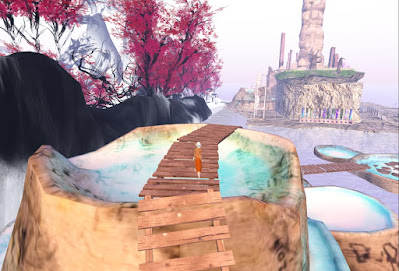 After twenty fun-filled days, the Fantasy Faire is coming to a close. Starting on April 22, the Faire offered 21 sims with well-crafted scenery to explore and see, and numerous events.  But nothing lasts forever, and like so many of the flowers on the sims, the Faire blooms for a short time, then fades away. After Midnight tonight, the sims will close to all but the volunteer staff, and soon after will once again fade back into the virtual nether from whence they came.

So if you haven't before, come by and explore the sims. While the event might not be as publicized as much as the Second Life Birthday and Relay weekend, the beauty and design of the areas make it a should-see event. And there are fun interactive events, such as the Fairelands Quest, and a couple sims have some quests of their own.

Yours truly has been exploring them, which means a little less time to write. For now. Later I should have something more about the Faire.

For Relayers, there are many other events later this season, such as the Relaystock this weekend, and the Relay weekend next month. But the Fantasy Faire has gotten many fans over the years. So with the closing of the sims, there will be a few tears that it couldn't be longer, thanking of the designers for what they made this year, and looking forward to what the next Faire will bring in April next year.

Feel free to see the pictures others have taken on the Fantasy Faire Flickr page (or add a few of your own): https://www.flickr.com/groups/fantasyfairesl/pool/