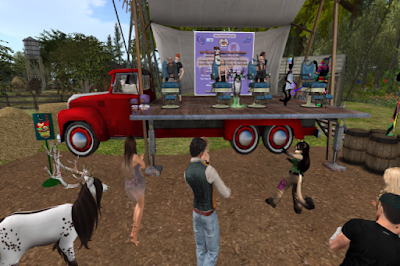 Yesterday in the Relaystock 2021 sim was the "Bid the Lindens Bald" party. For a couple hours, Lindens and Relayers mixed it up in the crowded northeast corner of the sim with over fifty avatars. Six teams each made up of a group of Lindens (or Moles) and one of the Relay teams competed for donations with the promise that the one coming up with the least amount would get shaved.

There were various over-the-top promises, "Team 4 promises to make all bills disappear if they win!" "ave The Moles!!!  No Lag for a Year!   Donate to Team 6."

The Newser wasn't able to be there at the time the final totals, and who got the haircuts, were announced. But we did get the results from Trader Whiplash.

The combined total was 840,369 L or $3,461 US Dollars. There were also 77,250 L worth of Linden bears sold, "The first ever animesh Linden Bear." Three teams also moved up a fundraising rank, "Seekers, Roos, Invictus all moved up one level."

So it seems Vanessa, Evie, Obi, Simon, Dakota, and Kreide Linden ended up with a shave. With the two furry Lindens, no word yet on how much the barber decided to take off.