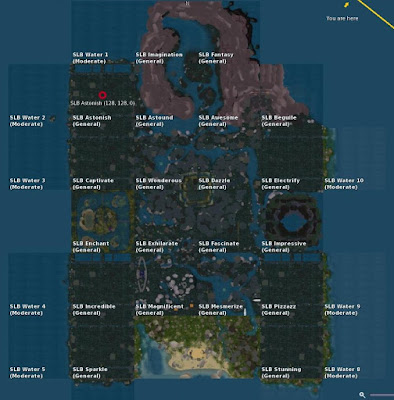 In our last update about the Second Life Birthday sims, they were back up, but still having their SL17B names.  Checking again after a tip, the "17" was gone, and some water sims at the edges were added.

Yesterday, the Newser was contacted by Linden Lab, informing us that we were once again welcome as an exhibitor. This marks the tenth year we've been doing so. In the Second Life Exhibitor's group, it was stated, "We had 275 applications for 175 spots." So competition for the spots was fierce.

The announcement also stated the sims should be open to exhibitors sometime today, May 24. Unfortunately, one thing they won't be open to is published photographs of the area, even teasers of placeholders and closeups of Linden builds that reveal next to nothing about the whole thing. Which is unfortunate as teasers we've done in the past such as the bathroom with the three sea shells stirred up interest without revealing much of anything.