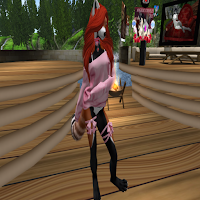 While the recent air show by the Sunbeamers and the Relaystock in which they took part have made news, there have been a couple other fundraisers of theirs. Earlier this month, DJ Snowbuns' (Skylark Lefavre) "Bid Me" event concluded. It ended at her event at the BBBC. Among the six choices, all had gotten at least some money. But the most popular for the bidders was the Red Panda avatar, known by some as the "Wah." The total raised was almost 17,600 Linden dollars.

And the bids are in for Snowbuns' six-choice "Bid Me" event. And the results are:

Snowy goes Red Panda for five weeks. More than a month of "Panda-modium"

A few days ago, the Sunbeamer's second date auction came to a close. This time, Snowbuns was on the other end of things as she had the winning bid for the volunteer, Matt Carlton. The winning bid was 1200 Linden dollars. This fundraiser was also at the BBBC.

And the date auction with Matt Carlton at the BBBC club is over. The winner is Snowy Brandy Lefavre (Skylark Lefavre).

The Sunbeamers have recently passed the 600,000 L mark, and as of the writing of this article have raised a total of 635,958 Linden dollars.