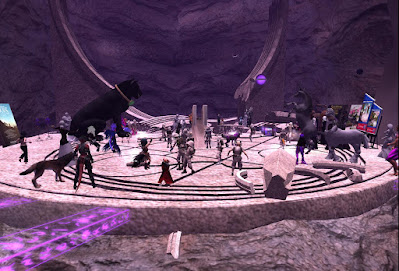 Plenty happened this weekend in Second Life. The Fantasy Faire was going on, including the dance event of the FF roleplay group Society of Extraordinary Explorers (SEE) in The Amethyst Rift (above) which raised a whopping one and a half million Lindens! This is believed to be the largest amount raised at a single event. Other events included the art exhibition opening party in the Confederation of Democratic Simulators featuring the work of Sanjeewa Kumara and Sujeewa Kumari of Sir Lanka and the late Artistic Fimicloud of the Sunweaver community, the fourteenth anniversary party of Furry Fashion, an episode of the Odd Ball featuring DJ Tantari Kim, and more.

More on some of these events later.