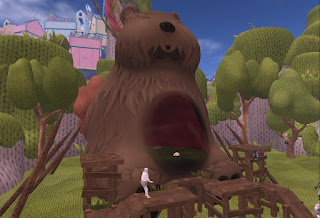 No doubt the Lindens have been chewed out by the residents many times. But never before has it been reported one was swallowed.

For the Fantasy Faire "Jail and Bail" events, the high point is when the Lindens (and sometimes Moles) take part. This year, the volunteer for the event in the Featherfall sim was Patch Linden. But if prison has been called "the belly of the beast," it was quite literal in this case. Instead of a cage, Patch ended up in the stomach of a giant teddy bear. To make matters more interesting, it was slowly filling up with fluid. 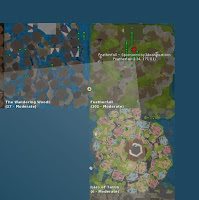 Needless to say, some people were shocked at the sight of one of Linden Lab's finest looking like he was in danger of being digested, "Oh my gosh you guys!!! Just holy *&^$$^&*&&%$%$&*$$^& cow!!!!" "Poor thing it's drowning!" Others were more relaxed, "Oh, Patch still has plenty of breathing room." "Nooooo, let Patch melt; his bears will become priceless relics to put in the museum!"

The event started at 1PM SL time, and attendance was high from the start. 75 residents were in at the beginning. Later on, the maximum number was raised, at one point 102 seen.inside. When it dropped to 100, I gave it a try, and somehow I got in.

Patch offered a number of items to bid on as part of the fundraising for this event. Among them was a year of Premium. Another was getting a sim for three months. There was also the chance to get a free name change.

Near the end, the total amount raised at the Jail and Bail was truly big, closing in on the one million mark,"We are sooo close to 1M on the kiosk!" Some residents had one more demand before letting him go, "MOARE FAIRE TIME! " "We needs longer fair time!" Patch got the message, "How about, the Faire runs until the 12th!!!! ... I'm trying to get you more time!"  The residents from some was approval, "Preeeettyy please with sugar on top and whip cream." Finally Patch announced, "OK!!! Here we go!!!!    Take it to the 12th!!!!" The response was cheers, "Thanks to Patch and everybody for doing this \o/ yayy Patch!"

Finally, Patch was released. Someone commented, "Uhoh we lost our flesh prison." Someone asked him, "Do you need a towel Patch?" The Linden responded, "Something. A shower too."

No word on how many jokes Patch Linden will have to endure.

Over 1,700,000 Lindens was donated at the event, an amount even larger than that of the roleplay party on Satuday

With the extra days, the Fantasy Faire goes on to Wednesday May 12.

Addition: There would be a post about the event on the Fantasy Faire blog (here).

Posted by Bixyl Shuftan at 6:29 AM