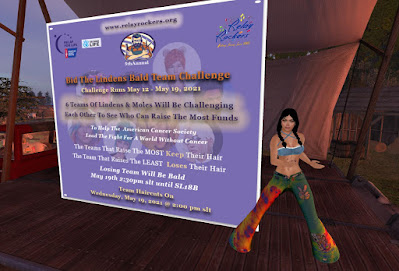 The Relaystock is over. But there's still one more event at Yasgur's Farm before it closes for another year: the "Bid the Lindens Bald" party. This event that is scheduled to run from Noon to 2PM SL time will be the last chance for residents to bid on the event.

Six Relay teams are putting their virtual hair on the line:  Seekers of Hope, The Original Sinners, Team Invictus, Roos With A Dream, Cure Chasers, and SHB Gems. There are also a number of Lindens, whom are divided into five teams, and several Moles whom make up team six, whom have been paired up with the Relay teams (Linden team one with Seekers of Hope, Linden team two with The Original Sinners, etc.) The Relay and Linden (or Mole) team that raises the least ends up on the barber chair at the party.

So if you want to see a large number of Relayers and Lindens in one place, be sure to drop by.