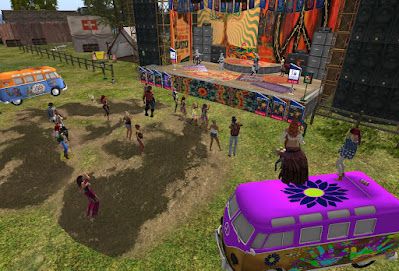 The Relaystock was good news to many teams. It's organizers the Relay Rockers hit Purple level, and many others went up a fundraising level, such as Meli's Maniacs, Seekers of Hope, Team Invictus, Roos With a Dream, and others. While the Sunbeamers didn't get step up from their current level, Jade, they did make some good progress on it.

DJ Cynthia's event at the Relaystock stage was Saturday May 15 from 5:30 to 7PM. She shared the stage with several other "beamers" such as Shockwave and team captain Rita Mariner. She ended up raising almost 40,000 Lindens in the two kiosks on the stage. The following evening, Sunday May 16, DJ Matt was the closing act at 7:30 PM. Her event would raise several thousand at the stage kiosk. But people would donated at other Sunbeamer kiosks that night, and after the event continue to donate. By Monday, the Sunbeamer's total had gone up to over 640,000 Lindens.

The awards for the CRFB DJ competition were also given out that night. DJ Mattie would get the fourth place trophy for when she took part in on April 13, raising over 110,000 Lindens for the Relay Rockers.

As of the writing of this article the team has raised a total of over  678,000 Linden dollars. With the Sunbeamer Medieval Festival this weekend, the total promises to go higher.