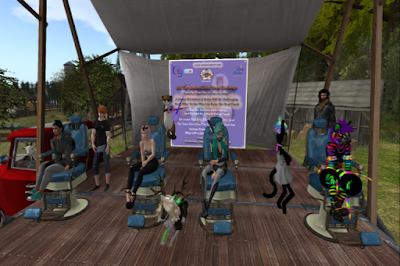 The 2021 RelayStock event concluded Wednesday, May 19, with the 5th Annual Bid The Lindens Bald Day.  RelayStock , hosted by the Relay Rockers team, supports the Relay For Life of Second Life and the American Cancer Society.

Since it began in 2014, RelayStock is a gathering of RFL of SL teams for 3 days of music and camaraderie set in a 1960s style festival region reminiscent of Woodstock.  Nearly 40 teams assembled across a landscape dotted with tie-dyed tents and old VW campers, raising their banners and flags, and placing their RFL Kiosks and Vendors around their sites. The Main Stage hosts musical acts sponsored by each team as part of their fundraising efforts.  DJs were joined by live performers such as Max Kleene, Keeba Tammas and The Tiny Maniacs and Todd Rumsford, and was the scene of the final round for the Celebrate Remember Fight Back (CRFB) Top DJ Fundraising Competition. The weekend set a record for combined fundraising with a total of L$1,290,669 raised for RFL, while several teams reached new Fundraising Club levels and met their season goals.

The CRFB Top DJ Competition saw DJ Stormy Dench, of the SHB Gems team,  take home the first place trophy by raising L$502,000 during her 90 minute set. Coming in second was DJ Baggie who raised more than L$400,000 during the competition.

Running in conjunction with RelayStock, the 5th Annual Bid The Lindens Bald team challenge concluded the event, with 6 Teams of Lindens and Moles competing to see who would raise the most donations for the American Cancer Society and earn the honor of shaving the head of the last place team. More than 40 Lindens and Moles participated.  The voting heated up as the 1:45 deadline approached.  More than 100 residents were entertained by MrMikie String as they donated to the various kiosks, amid promises (Vote for us for a year without Lag) and playful threats (Bald Moles Make Sink Holes). Voters could either purchase a limited edition animesh Linden Bear or donate directly to a kiosk for each team. In the end the team made up of Darcy, Grumpity, Kristin, Patch, Spots, Vix Linden prevailed with a total of L$296,336 raised and had the honor of shaving the heads of the team consisting of Dakota, Evie, Kreide, Obi, Simon, Vanessa Linden. The losing team will appear in SL without hair until the SL18B celebration in June. All together the event raised L$ 840,369, including the sale of 309 Linden Bears.

“We really appreciate the Relay Rockers team for putting in so much work on this and inviting us to participate. The event was a great success, lots of fun, and we're already looking forward to next year!" said Patch Linden, VP of Product Operations, Linden Lab. RelayStock was organized by Arizona Ballinger of the RelayRockers. Bid The Lindens Bald was coordinated by Trader Whiplash for the Rockers and Derrick Linden on behalf of Linden Lab.

The 2021 Relay For Life season in Second Life concludes on June 12 & 13th with the annual 24 hour walk. Current fundraising totals stand at $350,000, once again placing the virtual Relay among the largest Relay events in the world.