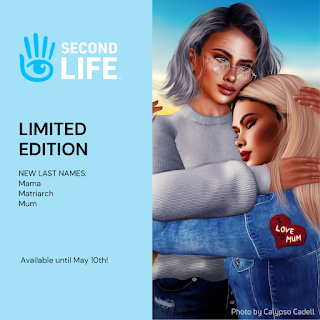 To celebrate Mother’s Day and all the mothers in the Second Life community, we are releasing new limited edition last names today, only available until May 10th:
Mama
Matriarch
Mum

These names are seasonal and may come back around this time next year, for a limited time.

On April 1, Linden Lab announced two other limited edition last names which were around for only a week. It was never stated whether or not they will be available again.

Posted by Bixyl Shuftan at 6:51 PM