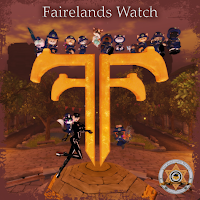 The Fantasy Faire is noted for many smaller events taking place as part of it. Among them are the "Jail and Bail" fundraisers. For those not familiar with the idea, a volunteer is "arrested," and detained for a certain amount of time in a cell while Lindens are donated for his or her release. Tomorrow is a special Jail and Bail, one involving Patch Linden and probably other Lindens, as well as some Moles.

Our friends and fellow Fairelanders at the Lab are some of the most supportive people, and make the Faire possible each year. So, naturally we have the most stalwart of them, Patch Linden arrested for your amusement! Yeah, see this is why we can’t have nice things…

In addition to being good sports, the Lindens always bring goodies and temptations in a sack as big as a whole sim – Region! Not sim! We say Region now. Sorry, Patch!

Uplift to the Cloud with us as the Fairelands Watch proves once more that their reach knows no bounds!

There was even a radio ad made for the event.

The event takes place today in the The Cerulean Bombora sim, from 1-3PM SL time.