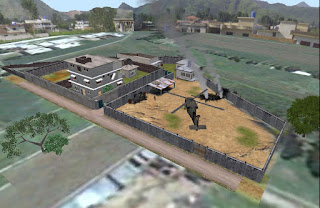 It was ten years ago from yesterday, on Monday May 2, 2011 that the news came out about the death of terrorist leader Osama Bin-Laden, the planner behind the 9/11 terrorist attacks on New York and Washington DC, killed by a team of US Navy SEAL troops. Soon after a build of the Abbottabad compound where the battle took place appeared here in Second Life. The build would remain for several months, and no doubt was the scene of some reenactments, such as the one filmed and shown on Youtube. But like the real-life location, eventually the virtual location would be demolished.

The death of the infamous mass-murderer and arch-criminal was greeted with cheers across the United States, including crowds waving American flags in front of the White House in Washington DC. Ten years later, Washington DC still has extra police patrols and barriers around the Capitol building, which a few months ago was attacked by a mob, killing and injuring a number of policemen, a reflection of the worsening political divide in the country that would have been unthinkable in the days after 9/11,