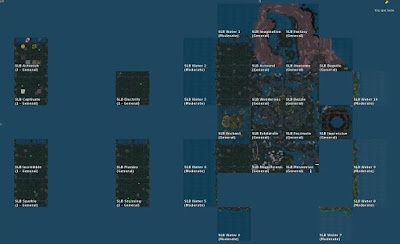 The SLB is open to some of the exhibitors. The Lab has started contacting them one by one and assigning them a spot. The Newser hasn't been assigned one yet, though it will most likely be soon.

Several of the SLB sims, Astonish, Captivate, Incredible, Sparkle, Electrify, Pizzazz, and Sparkle, have been separated from the others. Presumably these are the sims the exhibits will be on (the Newser's exhibit last year was on Stunning, and the one at the SL16B was in Sparkle). This is similar to when the sims were separated in two groups last year in the days before the event opened. But this time the sims in question have been further split in four separate groups.