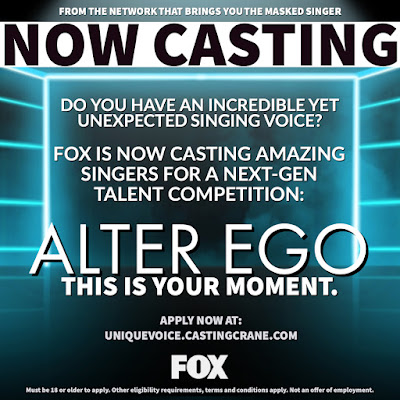 Some of you may have heard of the "Masked Singer" in which celebrities perform on stage in costume. It seems the network will soon be showing another show: "Alter Ego." In this show, the contestants won't be performing in real life, but as avatars. A few days ago, Linden Lab posted about it on the official Second Life blog.

Attention, Second Life musicians! Do you have an incredible yet unexpected singing voice? FOX TV is now casting amazing U.S.-based singers for the new nex-gen talent competition “Alter Ego,” which is scheduled to air Wednesday nights at 9 p.m. on FOX TV immediately following “The Masked Singer” this fall.

“Alter Ego” is an all-new original singing competition where lost dreams and second chances are reignited when singers from all walks of life become the stars they’ve always wanted to be. However, these contestants won’t perform as themselves. Rather, they’ll be given the chance to show how they’ve always wanted to be seen, creating their dream avatar to reinvent themselves and perform like never before.

For anyone interested in applying click on this link: https://uniquevoice.castingcrane.com/ ; People will have to enter information such as name and address, but also "social media handles" such as Second Life account names. There are also questions such as, "What personal struggles have you had to overcome?" and are asked to submit a one minute video of themselves singing "to an instrumental track."

So if you have a good singing voice and able to design avatars, this just might be the show for you. *