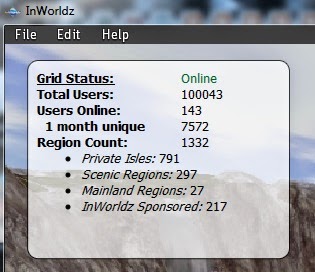 This week, the virtual world of InWorldz reached a milestone. The official total number of residents passed the 100,000 mark.

Daniel Voyager wrote the landmark number had been reached on May 15 at 6:37AM SL time. "It's taken almost 4 years to reach the 100,000 registered users milestone, and in another four years, I would imagine InWorldz (will have) reached the 200,000 ... mark if rates continue as they are."

Congratulations to InWorldz.
Posted by Bixyl Shuftan at 8:00 PM