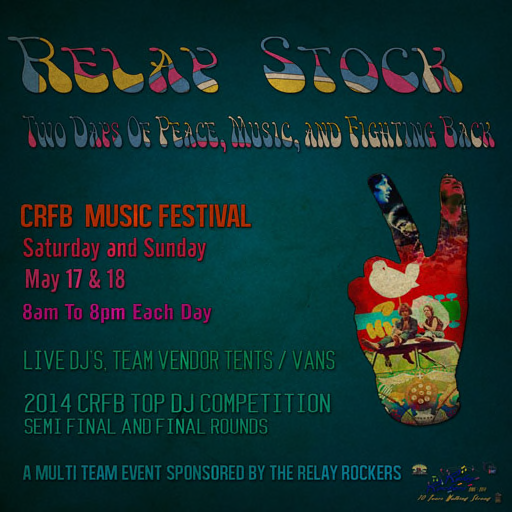 The Relay Rockers invite everyone to join them on May 17 and 18th for Relaystock, a multi team Relay For Life of Second Life event open to the first 60 teams to apply.

The event will feature 'Team Sites' around a 60s style festival stage.

Teams have been invited to bring Kiosks and Vendors, host 2 hour DJ segments on the stage and participate in one the most popular events this year, the Rocker's 2014 Celebrate Remember Fight Back Top DJ Competition.

"We have been fortunate to have participants from many teams in the CRFB Event" said Rockers Co-Founder Trader Whiplash. "RelayStock is our way of saying thank you for the huge support across the grid for our event.  It  affords every team the opportunity to share in a super fund raising event."

Nuala Maracas added, "This is just another example of the One Team concept in Relay. It doesn’t matter who's kiosk or vendor the donations land in, after all we are all on the same team in the end."

The event will be held at Relay dAlliez.  Relay dAlliez is dedicated to the memory of Alliez Mysterio, who founded the Relay Rockers team in 2005, with Trader and Nuala. Alliez was lost to breast cancer this past fall.  The sim has been available to any team for events at no cost,  a 10th anniversary gift to Relay from the Relay Rockers in honor of their own 10th Anniversary.