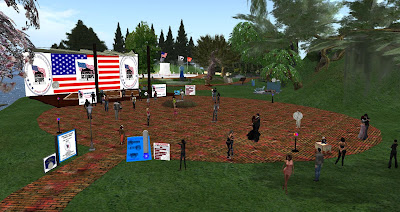 Sunday May 31 at Veterans' Isle was the scene of the monthly benefit for "Homes For Our Troops." From 5PM SL time to 9PM, four live musicians performed for the crowd. Frets Nirvana, who helped organize the event, gave the following announcement: 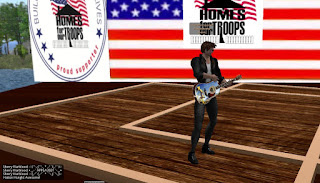 Our May 2015 monthly benefit concert for Homes For Our Toops will be this Sunday, May 31 from 5-9 PM SLT. Capping off a month in which we have celebrated a Memorial Weekend remembering our veterans and what they have sacrificed for us. Come out, support and help us to continue the Memorial weekend's thoughts by helping our severely wounded veterans through Homes For Our Troops.
To learn more about the Homes For Our Troops visit https://www.hfotusa.org
We have another great lineup of premier talent from the Second Life musician community.
5 PM - Chapman Zane
6 PM - Grif Bamaisin
7 PM - Frets Nirvana
8 PM- Red Heaven

Chapman Zane was the first to take the stage, for the audience whom danced while he played or just stood and enjoyed the music. In the second hour, Grif Bamaisin took over to play for the people. For the third hour, Frets himself took his guitar to strum some tunes. The final hour was handled by Joel Elide, whom had a couple earphones over his head as he played. 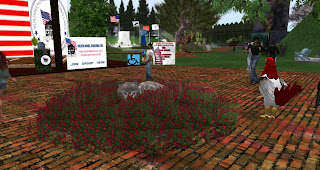 There were a few antics, such as one man who brought over a huge pet kitty, whom liked to lie down and hide in a patch of grass in the dance floor, as if waiting to pounce on something or someone. There was also someone going around in a human sized chicken avatar (perhaps trying to distract a certain fox reporter). Irronically enough his surname was "Poultry." There was also someone singing the Canadian national anthem, "O Canada! Beneath thy shining skies, May Stalwart sons, and gentle maidens rise. ..." 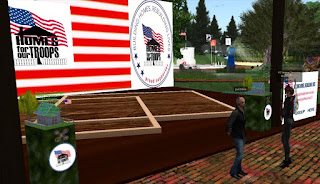 A couple days later, Frets would make an announcement on Facebook: 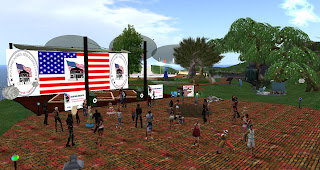 We have concluded our benefit efforts for Homes For Our Troops in Second Life for the month of May, 2015. I am excited to report that we were able to collect a little over $1250 for HFOT in May. This is the way to do it folks! Hopefully we can keep this momentum going.

A special thanks goes out to our performers and their managers at our scheduled monthly benefit. Chapman Zane, Grif Bamaisin and Red Heaven ((Joel Eilde), and their managers Ceithlin Zane and Bonita Denimore all gave an outstanding performance. Thank you for your kind support. In addition, other's helped with their own efforts with events this month.

Thank you Victoria KJeller, Dave Smith (Anek Fuchs), Sparkie Cyberstar and Angel Manor, and Meegan Danitz at Rhi's After Dark for letting me conduct my own effort there this last month. Additionally Felena Avro and Coolsix Rocking Country who conducted a benefit. And as usual thank you for Dahlea Milena for all you do at Veteran's Isle in Second Life. And of course thank you to everyone who donated.

It is an honor to be a part of this effort. Let's keep it going!

The next Veterans Isle benefit is on Sunday, June 28.