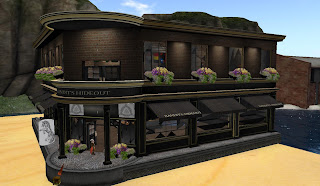 Tonight is the Grand Opening of the Bandit's Hideout Pub. Owned by Bandit Starrwolf (banditwolf100) the Hideout is an Irish-themed club in the Drakon sim that promises to be a place of music, fun, and revelry. "I have a traditional Irish pub setting with all the refinements of larger establishments." Bandit told me, "I don't know about other places, but we are here to have fun."

The opening event will have lots of cash prizes. Bandit told me  there will be "500L being given away every 30 minutes in random drawings." Plus there will be a 500L Best in Irish contest. But there's also something that yours truly has never heard of before as part of a grand opening event: a barroom brawl. Bandit will be handing out seven HUDs for the event for seven brawlers, "I will use the name randomizer if I have a lot of brawlers and hooligans show up," plus take part himself. 1000 Lindens goes to the last one standing. 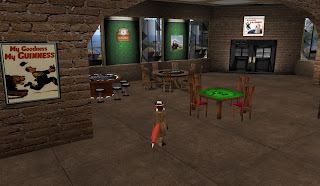 Dropping by the place, there were certainly plenty of the trappings of an Irish pub, with lots of barstools around a central bar. But there was also a dance floor, as well as some couches with optional cuddle poses for couples. A peek upstairs revealed there was more to do between parties besides chat. There were three games: Russian Roulette, "Cards Against Humanity," and "Greedy," in addition to a pool table. So there were quite a few ways to keep a crowd entertained. 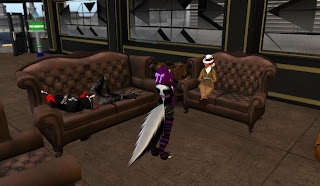 While there, I ran into the barkeep, Provokescene, "I bartend for this place." As it turns out, the bar has already been open unofficially for a week, "We've played Russian Roulette and have locked bandit in the bathroom and party hard." Asking about details of the bathroom incident, "We were all having a good time on voice and laughing while he went afk and we moved him in there. (laughter) He came back scared and got all jokey while everyone was laughing hard."

Asking him about the planned barroom brawl, Provokescene felt it came about, "Because the people here like to be spontaneous and have fun and Bandit came up with the idea ... it's really fun here and you can be yourself here."