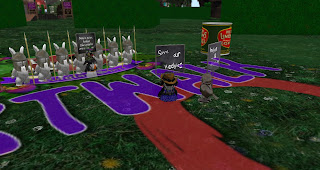 Throughout the month of May, the tiny community of Raglan Shire held it's "ArtWalk," one of Second Life's most well known yearly art exhibitions, attracting talent from all over the Grid. The pictures and photographs are set up on "hedges" for the event. But what happens to the hedges once the exhibition is over?

Hearing on Facebook that there was some activity going on at the Shire, I logged on and teleported over. I soon found the activity. There were two tinies with protest signs, "Save our Hedgies," and "Hedges 4 Hedgies!" Facing them was a third tiny with a line of tiny bots behind him, dressed in ancient Greek helmets, and carrying a third sign, "Move over hedges, the Greeks are coming." 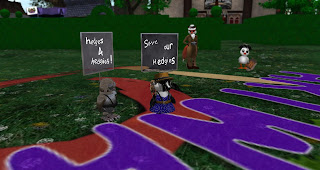 I walked over just as the conversation went, "Will there be waffles cooked fresh at the Ool?" "But this is still a fun little protest (big grin)." I then greeted the tinies, "Heh, what's this about a protest?" One of the tinies looked at me with puppy-dog eyes, "*sniffles* Can we save a few hedges?" The other explained "we're just haveing a fun little protest about saving the hedges." They then chanted a "Save our hedgies" gesture. And indeed the bulk of the hedges that should have been up were taken down, with just a few still up. 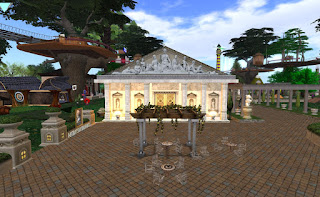 Raglan Shire does have a Facebook page, and checking that out there were more pictures of protesting, some with more tinies with signs, as well as one with the bot army. Somehow, the sight of a line of tinies in Greek armor doesn't exactly inspire the same feeling as a line of angry Spartans in Greek armor.

Going back later, I didn't see any of the remaining hedges. What I did notice was a Greek temple. It seems for Raglan the Greeks were coming after all. As for what hijinks the tinies of the Shire will be into next, time will tell.

Note: From what I read, there never was a serious protest. This was done in the name of fun.