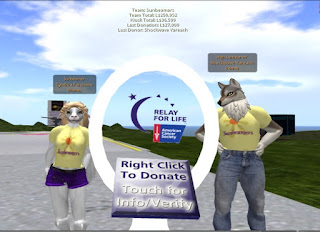 Yesterday, the Relay for Life in Second Life's Team Sunbeamer passed the 250,000 Linden mark in the amount of cash it has raised this year, the equivalent of one thousand US dollars. And so achieved Gold rank among the Relay teams fundraising levels. The milestone was reached at the tail end of the Sunbeamer's "Road Rally" event in the Pacific Waters sim in the Sunweaver Estates, the community behind the Relay team.

The announcement was made in Relay chat at about 3:44PM SL time, "Ladies and Gentlemen , Team Sunbeamers has just passed 250,000 Lindens raised, we have now hit Gold rank." There was quite an enthusiastic reaction among the Relayers, "WOOT!! The Sunbeamers just hit GOLD!!!!" "Congrats!" "Congratulationsss !!!" "NICE!!!" "YAY Sunbeamers !!!" "GOOOOOOOOO SUNBEAMERS!!!!"

"Looks like cancer is having a really bad day again, something I love." "And one day hopefully it will have such a bad day that it is nothing more to fear then a common cold." 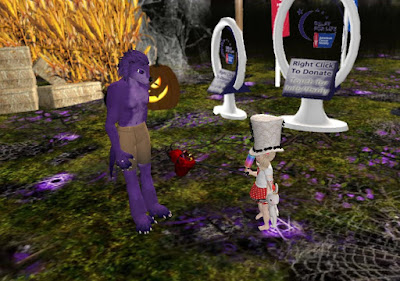 And for yours truly, it mean that a certain "avatar challenge" of mine had been met. Instead of a "Bid Me" event, like the "Bid Me Human" I did a few years ago when Team Sumweaver was the Passionate Redheads, I instead told the Relayers if my team reached Gold Status, I'd wear a purple otter avatar for a week when in public, unless doing Newser related things such as interviews. And so with the challenge met, I changed over.

So why the purple otter? Purple has been a rather important color for the Relay. And like skunks a couple years ago, there seems to be a thing for otters in the Relay this year, notably among Team Strange Journey. Cuddly Waffle here in the picture with me was happy with the "Urple otter" as she called it, her persona being that of a young child.

And so for Team Sunbeamers, an important milestone has been reached, heading into the last month of the Relay before the weekend walk with their heads held high.