Scenes From the SL12B 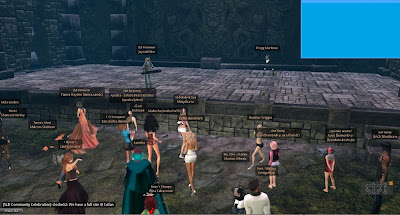 Friday June 26 was the start of the SL12B "Music Fest" sponsored by Linden Lab. Taking place at the Ixtlan Stage at SL12B Dazzle, among the performers were Jaycatt and Frogg at 12:30 SL time. Taking place in a packed sim, a friend who requested a teleport from me was blocked from coming in. Among those who were there was Xiola Linden. With the lag, not everybody rezzed on my viewer, such as performer Frogg, whose amphibian av was showing only his head, hands and feet. 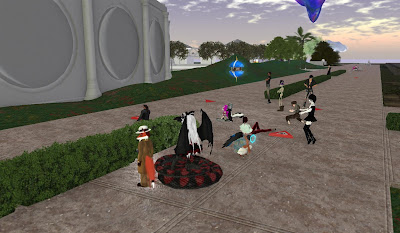 Friday at 1PM was the "Meet and Greet" with Ebbe Linden, the last one for the SL12B. While I got there early, there was a sim restart, so had to hop away. But by the time I tried to teleport back, both sims were full. The best I could do was listen in from the outskirts, which a number of others had to as well. Others with me included Pygar Blu, Catboy Qunhua, and Kenny Luckless.

Gemma Cleanslate was there, so her article about Ebbe's interview will be available later.

Saturday and Sunday mark the last two days, officially, of the Birthday. As it turns out, yours truly has to work in real-life, so that cuts down on time for both exploring, seeing, and writing. But the sims will be up for a few days afterwards for both those whose computers couldn't handle the lag, and those wanting to see what they missed.