Our first anniversary was an important milestone. We had gone through a whole year, sticking to what we do, gaining sponsors, and would be around for quite some time. Our second, it brought back memories of Dana making a big deal out of our predecessor paper's two year anniversary, her feeling that it was being seen as "all grown up." Three years, we had matched our predecessor in time on the grid, at least in the number of anniversaries. Four years, we had accomplished what the old SLN hadn't: a fourth anniversary.

Now ... difficult to say how it feels. I've certainly been doing a lot of looking back to the days of JamesT Juno and Dana Vanmoer. While we've been trying to preserve some of what was published then, perhaps it's important to look back to not just what you've done while in charge, but also looking back to how you got to where you are.

Five years ago, I wasn't quite sure what lay ahead as our former team leaders logged off for the last time (at least as newspaper owners). A couple months earlier when Dana told me and the other reporters of Second Life Newspaper that the paper would be shut down, it was stunning news. I'd been writing articles about Second Life almost since I began logging in here regularly, and I couldn't imagine going on here without it. I also was part of a team I didn't want split apart to the four winds. 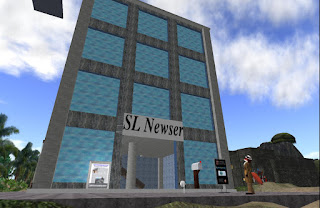 But going from reporter to the head of a newsletter, that was a bit scary. I wasn't as talented as Dana when it comes to leading a team and marketing a business, (probably still not as I never could get the numbers she did). Would those who read Dana's paper follow one under a new editor? Would we get the support of advertisers? Indeed in our beginning the eight thousand readers per day Dana attracted had dwindled down to just two thousand for the whole month. For months, I would rely on the hosting job I had at Mystery to help pay the other writers.

But eventually, the sponsors came. Podex was the first of a number whom over time have helped keep the Newser running, the Safe Waters Foundation and our old friends M&M Creations being our latest ones. Also, the readers came back. The 2,000 readers a month increased to 25,000 by July 2013.

There were certainly plenty of reasons to read the paper over the years. The expression "Timing is everything" may have come into play as just barely a week after we were under a new name, Linden Lab dropped some breaking news with the layoffs of about a third of their staff. This included some popular Lindens whom were sorely missed. Events continued in rapid succession that year with the CEO resigning, Philip Rosedale coming back as interim CEO, the "Emeraldgate" scandal of the most popular third party viewer at the time which would eventually lead to what is now Team Firestorm, the decision to merge the Teen Grid with the main one, and more.

Over time, we have continued to deliver the news about major happenings from Redzone, to CEOs Rodvik Linden then Ebbe Linden coming aboard, the arrival of mesh, real life companies asking their copyrights be respected within Second Life, the arrival of the MLP avatars and pony community, when Linden Lab distanced itself from the residents such as their decision to no longer take part in the Second Life Birthday celebrations, and when it began to interact with them more such as bringing back the Linden Snowball fight, questionable moves such as their decision to ban all third-party Linden dollar exchange companies, then partially reversing the order, the fall of the SS Galaxy, and many more. We've also reported on occasion about other virtual worlds, such as InWorldz, and done a few game reviews.

But there's more to the news than the big out of the blue events on the Grid. We've put the spotlight on many places across the Grid that offer a nice place to relax, exciting things to do, or just simply look cool. We've highlighted events of all kinds, from sim and community anniversaries, to fundraising events such as those of the Relay for Life. And we've given attention from the various movers and shakers of Second Life from content creators to sim owners to community leaders, sometimes just the simple man on the street who wants to express his/her opinion on the soapbox.

While the statistics of our readership are nice to read, what truly encourages us are the messages of praise we've gotten over the years. People such as those from the Relay for Life have thanked us for our coverage of their events. Also are the complements of people whom have been looking for things to do and places to see and found both in the Newser.

Sadly we've had to say goodbye to some people over the years. Shellie Sands and Grey Lupindo have taken an indefinite leave of absence to deal with real life matters. But other talent such as Fritter Enzyme and Ozymandius have come aboard. We're happy to have you as part of the team. 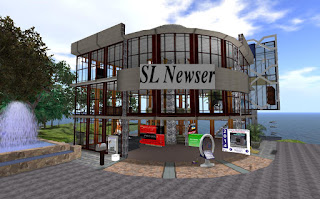 So what does the future hold? Right now, there's been worry about Linden Lab's new virtual world under development, that they'll turn out the lights here to force people to a place with fancy bells and whistles but little convenience or freedom. Such fears are nothing new. In our first year, people wondered if Linden Lab was on the verge of selling Second Life, going bankrupt, or both. Unless there's some major economic or military calamity, Second Life will be around for a long time. Perhaps long enough for yours truly to turn over the Newser to a new editor years from now.

We'll keep on doing what we do best, informing you about the people, places, and events of Second Life, and provide a little chuckle along the way with an occasional cartoon or fun story.

Special thanks once again to the sponsors who fund our paychecks. Thanks to the Sunweaver and Angel Estates whom have given us a home inworld. And of course thank you the readers for keeping us going.

Editor and head reporter, Second Life Newser
Posted by Bixyl Shuftan at 6:02 AM