A bowling alley sprung up at Raglan Shire this summer to go with an "OOL" (no P in our OOL) and theater, all with a Greek theme. A perfect 300 score soon followed at the lanes, which astounded all because it's hard to break 150. Umiko Juriya put up the 12 straight strikes. The shire was all abuzz about the score, so this panda tracked down the hatchie, who gave a few clues on how to bowl better. 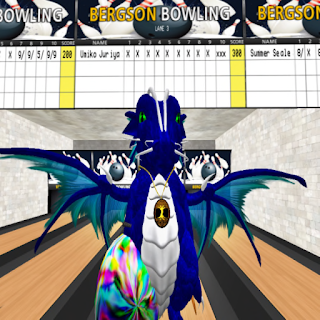 "I LOVE the bowling alley here. It's lots of fun.," Umiko said. "I'm quite glad that Kage (Stratten) put it up."

The aquatic dragon.said she's only bowled a couple times in real life. "I only recall bowling once or twice in my real life, and I don't think I did very well. ^_^;;;"

In Second Life, she's got plenty of shooting experience. "I do combat, elsewhere in SL and it's a bit easier to aim at stationary pins than at people running around all over the place. -^_^-"

She also gave this tip for a good score: "If you find the spot you got a strike from (and you're not in the way of other bowlers, hehe), then you probably shouldn't move."

Umiko displayed her winning bowling ball, which she's texture special for her use. "I texture a lot of my things," Umiko said. "With this one, I like the swirly, styled-rainbow colors. I don't know if it has any real effect on my bowling. I couldn't change it to help my game. (Though I would if I could! XD)."

Asked if being a dragon had an advantage for bowling, Umiko said, "It's just the way our avatars look, hehe. I don't think we have any more or less of an advantage."

Umiko did break a smile towards the end of the interview about her perfect game. "Eeps! that was silly cheatings hehe," Umiko said, "My computer can handle having two viewers open. So I had my other character at the end of the aisle knocking down the pins, and then I would throw the ball. XD If you cross that (approach) line, it nulls the score. XD."

Still, quite the sporting achievement, the use of two screens, two characters and the timing to get all the pins knocked down in a short time span for each frame.

Finally, Umiko's take on a bowling league: "It would be fun, especially since it's easier in Second Life than it is in real life."

The official name of bowling alley is Mount Raglympus Bowling Lanes, and is at Raglan Shire (200/164/23)

Liam Metaluna
Posted by Bixyl Shuftan at 6:01 AM