It was a bit more than a week ago in which Linden Lab offered this year's gift avatar for the Second Life Birthday a little early to Premium Residents. Now, the avatar is available to all, at least until July 31st. And what is it? Well, it seems the Lindens were inspired by the "Jurassic World" dinosaur movie, as the avatar is a mesh velociraptor, or rather a "party velociraptor." 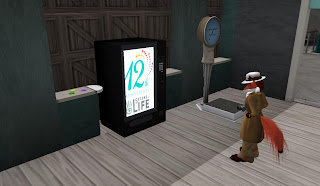 Imagine yourself in a jungle on a remote island brimming with possible adventures and spectacular flora and fauna to explore. Now, imagine that remote island jungle is what we’ve come to call the Second Life grid, and imagine that you are … a Velociraptor! Sounds a little bit like a pretty weird but cool dream, right?
Well you no longer have to imagine the dream - you can live it with the Second Life 12th Anniversary commemorative avatar! Pick up your free avatar at Hairy Hippo Fun Land or off the Marketplace before this raptor becomes extinct at the end of July!

Hopping over to Hairy Hippo Fun Land, one could pick up copies of the avatar through a vending machine. In a box, it had to be taken elsewhere, rezzed, and unpacked. Being mesh, the avatar was just a few pieces, with detachable sunglasses and part hat.

"But wait, there's more." Linden Lab is also having a 10,000 Linden contest for the best photo of the avatar. 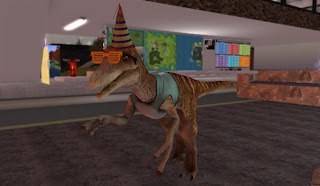 Now that you’ve got your raptor - it’s time to take ‘em for a test drive. Share snapshots of your raptor avatar celebrating SL12B to the Second Life 12th Anniversary Snapshot Contest from now until July 20th, and you could win 1 of 4 incredible prizes - L$10,000 , L$5,000, L$3,000, or L$1,000!
Be creative! This limited-edition raptor has the entirety of the grid to seek out a picture-perfect spot to take a winning snapshot
To see what pictures others have taken, there's an Entries Page, including one from Crap Mariner, "The Very Ugly Duckling."

So there's Linden Lab's present for the residents. Now if they could only give the third party exchangers a break.