Various Happenings at the SL12B 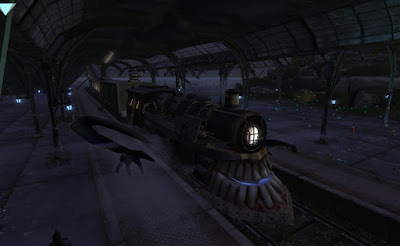 Yours truly spent most of his time at the SLB grounds before Press Day building the SL Newser exhibit, so I didn't get much of a look elsewhere. On Press Say itself, I only had a short time to get around. I didn't get the time of any official tour, so just looked around a little at the entrance sim of SL12B Beguile. The "dream" here looked more like a nightmare with this disturbing-looking train. 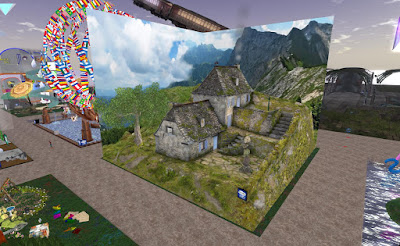 Not far from the train into the next sim at SL12B Impressive (224/57/24) is the exhibit of our sponsor M&M Creations, by 10 and Marcthur Gooson with their "Cottage Ma Mason." 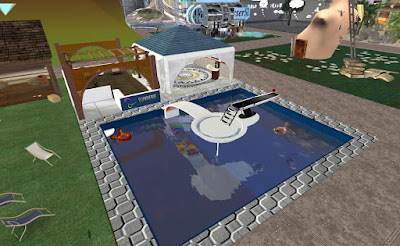 Near the Newser exhibit at SL12BWonderous (232/231/22) is the SL Universe Forums exhibit by Soen Eber. 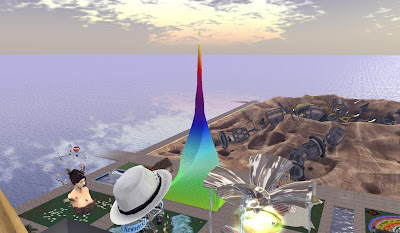 Just across from the Newser's exhibit at SL12B Wonderous (233/196/22) is the "Spire" by Mac Kanashimi, whom assisted with the Cake Stage and whom some time ago worked on the "Pinwheels." 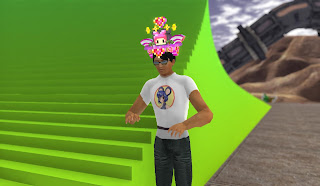 I happened to run into Mac, and had a few words with him. The hat of course was from Mikati Slade, the main builder of the Cake Stage. "So how was it working with Mikati?" I asked him. Matter of factly, he answered, "Just like 3 years ago (at the) cake stage SL9B. She made a scale 1:10 model of the cake stage, then uses my script to move an object to the right region, to the calculated real stage coordinates, then resize times 10."

Of The Spire, "(The) view from the top straight downwards is very nice." Asking him about it, "Well. take a square, then draw a square in it, but slightly smaller and slightly rotated, continue until the squares are small. Later I added the color effects and the changing from left rotating to right rotating squares, and back."

I asked him what other exhibits attracted his attention, but his answer was, "I didn't write them down, i was just flying around." 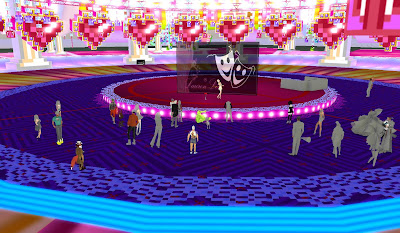 I soon had to be elsewhere, but did come across two events that evening. One was a stand up comedy performance at the Cake Stage at 4PM SL time by SL comedian Lauren Weyland. 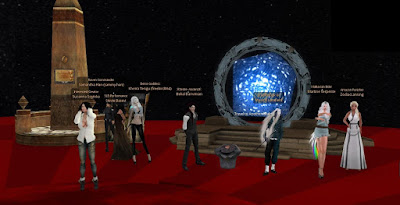 An hour later at the Auditorium (Dreamatorium), was a group of roleplayers of the "Sanctuary" RP, discussing the history of their roleplay, and a few words from each of the players there.

Among the roleplaters was ZodiacLansing, whose words included, "Sanctuary, like several other sims, is born out of an intense love and it shows. When I arrived in the sim and explained that I was new to CCS, I was taken aside by several of the players who worked with me until I understood how things worked. Even to this day, they are willing to help me with any questions I may have. The environment of Sanctuary is one of help and kindness out of character. The members of the city are always willing to help out each other and new players so that everyone proves to the a be better player.

"When the RP starts, things can happen that are dark, but the people remain the same friendly sort who are willing to help. That's the biggest difference I have found and that is what brings me back to the city over and over again. As many will attest to, in our sim we strive very hard to create an atmosphere that sponsors RP and friendship in OOC. To me, it's the best sim."