The Newser's Anniversary Celebrated at The Vinyl 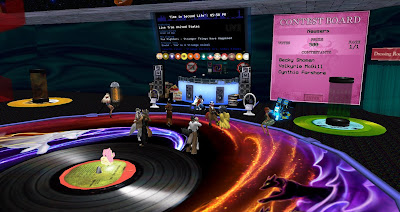 On Thursday evening, June 5 at 6PM, the first of the SL Newser celebrations took place at the classic rock club "The Vinyl" high above the HV Community sim.

BREAKING NEWS! SL Newsers is having a Birthday Bash at The Vinyl Museum at 6 pm until 8 pm SLT. Come honor our favorite reporter Bixyl Shuftan and his crew as SL Newser is another year older. Tonight's Theme is Newsers. Be a TV Anchor, or news reporter for a chance to win 500 $L and a free Newser Hat! 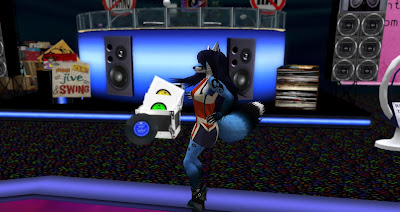 Tantari Kim was the DJ for the event. Was her Union Jack shirt a tribute to Dana Vanmoer, the editor of SL Newser's predecessor newsletter, whom was from Britain? Tantari says she was just trying to look cool for the event. Vinyl manager Skylark Lefavre commented that Tantari reminded her of a certain blue werewolf in a popular animated music video.

Throughout the event, Tantari was giving me the "roast" treatment with a series of Chuck Norris style jokes, "Bixyl Shuftan doesn't take a break from the news, the news takes a break from Bixyl Shuftan." "Walter Cronkite and Barbra Walters got together, had a son, and called him Bixyl Shuftan." There was also a joke or two from the crowd about me having a preference for investigating henhouses.

Also during the event, there were a few trivia questions given out about the Newser and it's predecessor paper Second Life Newspaper. Some could be a little tricky. 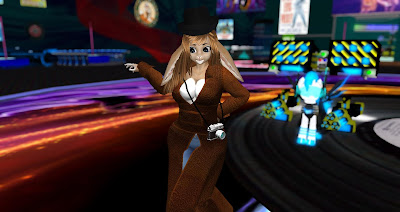 The 500L prize went to Becky "Sha" Shamen. She looked a little less like "fox news" and more like her stories were "hare-raising" though.

The events continue today at Gemma Cleanslate's beach at Thorstar at Noon, and then at Club Cutlass at 6PM, and at the Happy Vixen on Sunday at Noon.

For those wanting to check out this great Xanadu-style classic rock club, The Vinyl has events every Tuesday and Thursday, with two DJs performing 6-8 PM, and 8-10 PM SL time. The club was founded by Perri Prinz and RECoyote Mindes and currently managed by Skylark Lefavre.