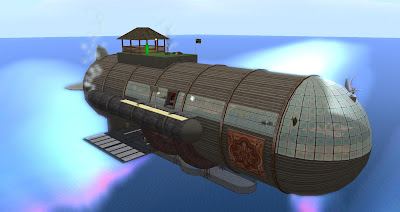 Last weekend on Friday May 29, Steelhead bade goodbye to the "Charity Way," an airship that had been the scene of a number of local events in the area. 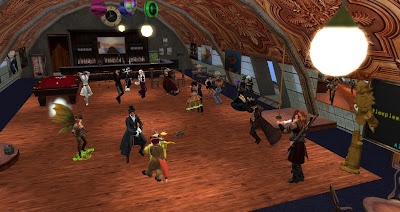 You are all invited as we say adios, au revoir, auf wiedersehen to the Charity Way, the floating skyship and bar that has been both a dance hall and my home in Second Life for nearly three years. 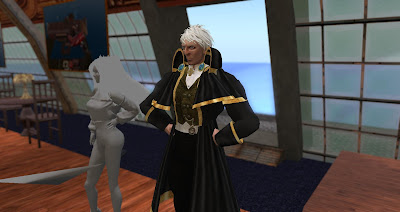 For nearly three years The Charity Way has served the Steamlands as a place to find merriment and togetherness. It has seen at least one wedding, one bachelor party, visits by Time Lords, more dances than I can count, and an attack by a giant air-kraken. It has served as a temporary home to those I care about and a store to sell my wares. Alas, all things must eventually pass and the ship must now make what may be its final voyage back to my inventory. You are all invited for one final dance in her main hall tonight, Friday the 29th.

The party started at 7PM SL time with Fuzzball Ortega DJing some science friendly tunes. Next at 8PM was Willow Leafstorm. Finally at 9PM, Zanya the owner of the airship played for the last hour. 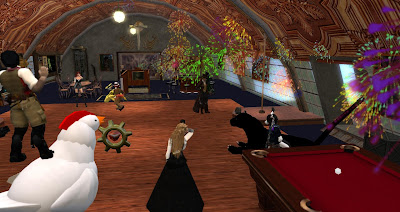 There were a number of jokes made and tales told of misadventures past. At one point, someone let loose a giant chicken. But local furry Beryl Strifeclaw (Gager) pounced on it before anything "fowl" happened. Finally at 10PM, the end of the part was marked with a fireworks show in the room. But as the ship was filled with helium, it didn't end in the kind of "bang" some feared. As the fireworks faded, people spoke their goodbyes, "Glad I've made the final night here."

The ship was formerly in  Steelhead St Hellens.